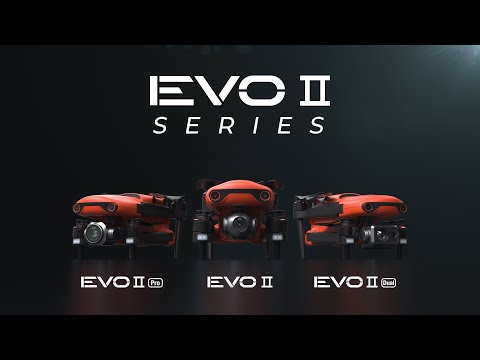 Covered in 12 vision position sensors, hooked up to an incredibly powerful flight computer, this fully autonomous drone can detect objects up to 30m away, in all directions, providing true 360° obstacle avoidance

Available in three camera variants, there is a an Autel 2 Evo to fit your  requirements. From the 8K camera, a cinema quality 6K PRO camera to the DUAL optical/FLIR unit, all provide silky-smooth footage thanks to an active 3-axis gimbal.

With incredible in-air stamina and staggering control and video transmission ranges, this drone is set to dominate the ‘prosumer’ market with its incredible feature set. The Autel EVO II supports H.264 and H.265 video codecs, storing the 10bit footage to the supplied MicroSD card at bit rates up to a staggering 120mbps!

Autel’s Evo batteries are 3S packs with a huge 7100mAh capacity. Their frame design facilitates thermal management allowing the drone to maximise flight time even in the most extreme environments.

Utilising a 2.4Ghz Alink, the Evo II has a maximum transmission distance of 9km. A collapsible design, the compact transmitter (with smartphone mount) can be folded down and stored in your pocket.

There are two elements to the online system.

Anyone responsible for a drone or unmanned aircraft (including model aircraft) weighing between 250g and 20kg needs to register as an operator.  The cost for this is £9 renewable annually.

Anyone flying a drone or unmanned aircraft (including model aircraft) weighing between 250g and 20kg must take and pass an online education package. This is free and renewable every three years.

Both of these requirements become law on 30 November 2019.

For holders of current CAA permissions or exemptions for drone operations (e.g. such as the permission related to commercial operations as required in ANO article 94(5)) and model flyers holding an achievement certificate issued by a UK model aircraft association with a CAA reviewed achievement scheme:

Remote pilots flying in accordance with a permission, exemption or operational authorisation (e.g. such as the permission related to commercial operations as required in ANO article 94(5)) that has been issued to a named UAS operator by the CAA will be exempt from having to undertake the online education training and test.

Similarly, where a UK model aircraft association already has an established and CAA reviewed ‘competency scheme’, members who hold an appropriate achievement certificate or award (such as the BMFA ‘A’ certificate) will also be exempt from having to undertake the online education training and test.

Any operators who are not covered under the conditions of a permission/exemption or do not hold a recognised association competency will need to complete the free online course.

To allow operators to demonstrate competence if challenged (for example by the police) the CAA will be issuing a formal exemption that can be used alongside existing permissions / achievements and any other relevant documents.  This exemption will be in place until 30 June 2020, when new regulations are expected.  We will be working with stakeholders in 2020 to put these into place.

Just a few of the organisations we've helped over the years